Anxiety is a normal reaction to something stressful or scary; it’s the ‘fight, flight or freeze’ reaction that helps us notice quickly when something happens, and makes sure we react quickly to keep safe.

Symptoms when anxiety has got a bit out of hand include feeling really panicky, sweating, racing heart, prickly or hot skin and needing the toilet!

Anxiety symptoms only becomes a problem when they last longer than average, start happening when nothing has occurred to start the reaction, or stop someone doing the stuff they usually do like going to school, or having a social life.

There are lots of different sorts of anxiety problem that you might have heard of like agoraphobia, or post-traumatic stress disorder – the label or name don’t really matter; what is important is what’s difficult and how can it get better.

The best help for anxiety is talking to someone – ask about cCBT and other ways to reduce anxiety. Look at the self-help pages and try some of the suggested ways to reduce your anxiety symptoms.

Depression is more than just having a bad day, or feeling low sometimes; feeling hopeless, lack of motivation, sadness, poor sleep, change in appetite, not wanting to go out and similar feelings lasting more than two weeks could be depression.

Depression is not a weakness; it is a reaction to difficulties and challenges in your life and can happen to anyone. The first good thing to do is see a GP so they can check out if any physical problems are making the depression worse, e.g. anaemia. Then the best way for a young person to tackle depression is with Talking Therapies and self-help.

Lots of people have heard of bi-polar disorder or have heard things in the media about it; people experiencing bi-polar disorder have really extreme mood swings – from feeling on top of the world, to really depressed. These mood differences happen over days or weeks rather than in one day. When feeling really high and good, people sometimes do really risky things, or have unbelievable ideas and thoughts (delusions). On the other side, when feeling really low people may have suicidal thoughts.

Sometimes it’s a friend or family member who spots the signs first rather than the person suffering, whether it’s you or someone you know experiencing this illness it’s important to get some good professional help; your GP may refer to the Mental Health Team for Young People. Treatment is not scary and people improve or recover and learn how to manage their symptoms.

Lots of people think OCD is about being really fussy and tidy, or needing to do things in a certain order. While these can be a part of what’s going on, with OCD the obsessive thoughts that something awful will happen trigger the need to carry out the compulsive behaviours (e.g. repetitive counting, repeating phrases, washing, cleaning etc.)

OCD commonly begins in adolescence – it’s a good idea to get help sooner rather than later as this can last a long time and cause problems with everyday living.

Schizophrenia is not a split personality, the term means split mind and is when thoughts and perceptions change and become disordered. Almost three quarters of people who are diagnosed with schizophrenia have their first experience of psychosis between the ages of 16 and 25. A psychotic episode may include hallucinations (seeing, hearing, tasting or feeling things which are not real), delusions (unusual or unbelievable thoughts and beliefs), difficulty thinking and feeling withdrawn and restless. You might notice these things in yourself, but it is also likely that a friend or family member will notice and support the person to get help.

It’s really important to know that illegal drug use can cause psychosis, and make it worse – but also stopping using drugs usually means the person recovers fully.

If you have any concerns about someone, then contact the Early Intervention in Psychosis team on 01279 698813, they will be really helpful and listen to you.

Patricia Deegan PhD is a psychologist and researcher and this video is her experience of a Schizophrenia disgnosis and the route to recovery.

Eating disorders are common in young people, and involve a disturbance of eating habits or weight control behaviour. Eating disorders can cause serious physical health problems in young people and stop normal growth and development. You might notice an unusual fixation about food and weight, someone getting really thin, exercising too much or hiding food and drinks. Young people who get help when an eating disorder has only just begun are likely to get well and stay well. A GP is the best person to see first and they make sure the whole family are involved in the person’s recovery.

Our online training academy offers a number of interactive courses to help you learn how to manage your mental health and provide support for others. Find out more

Side by Side is a supportive online community where you can be yourself. We all know what it's like to struggle sometimes, but now there's a safe place to listen. Find out more

Our highly qualified therapists have a range of specialities and approaches as we know it is not one size fits all.
Find out more

Follow Mind in West Essex on your favourite social network 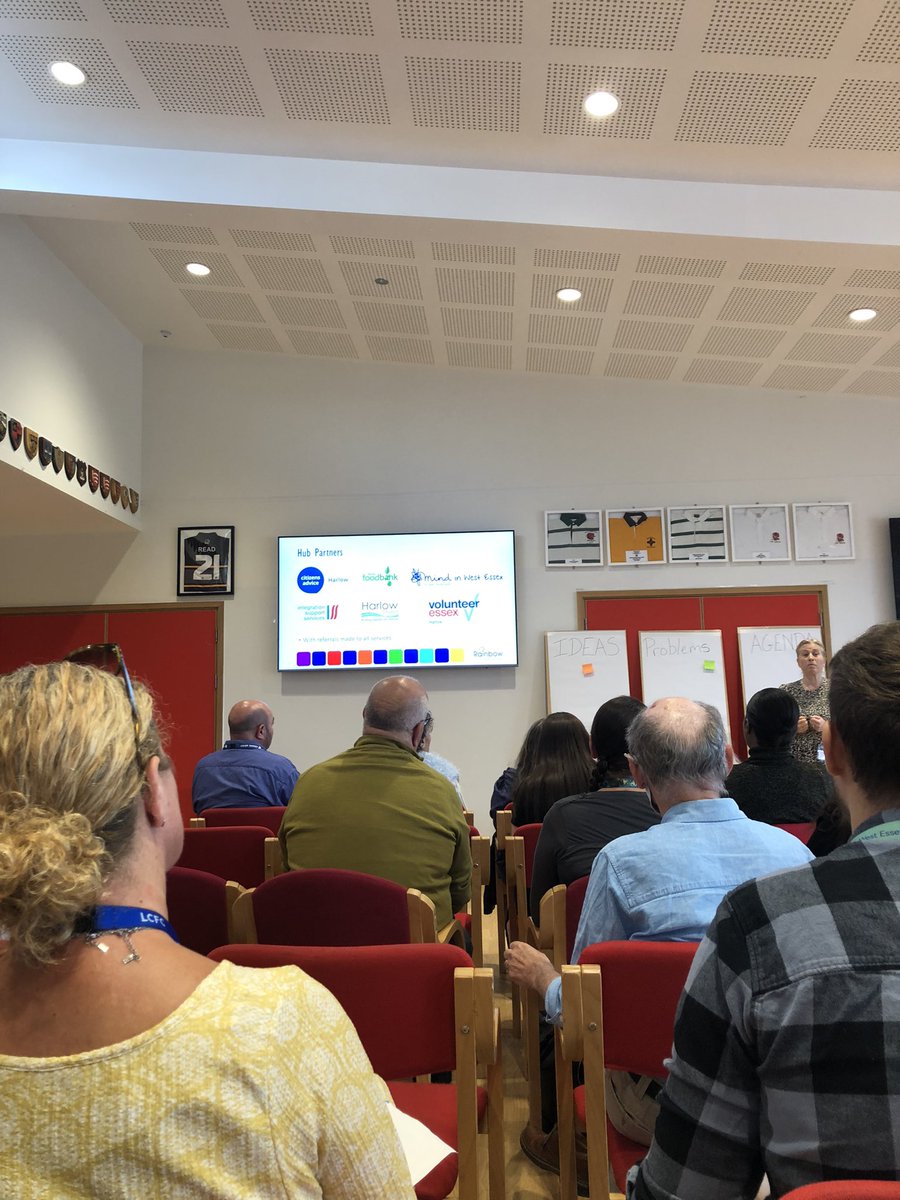 Mind in West Essex ·
@Mind_West_Essex
We will be at #EssexPride on Saturday!
Come and say hi 👋
#PrideMonth2022 https://t.co/YDiWvt4kuA
View on Twitter 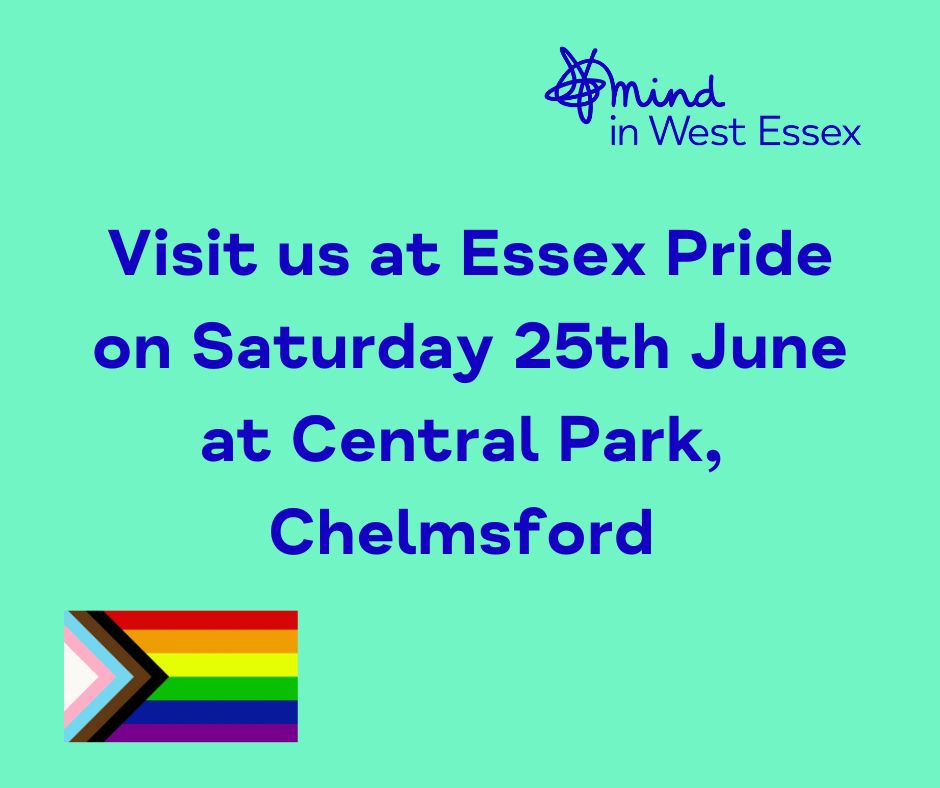 Is ideal for those who work in helping professions: mental health services, health care, emergency services, education, youth offending service, foster carers, carers or those who have an interest in the topics covered. 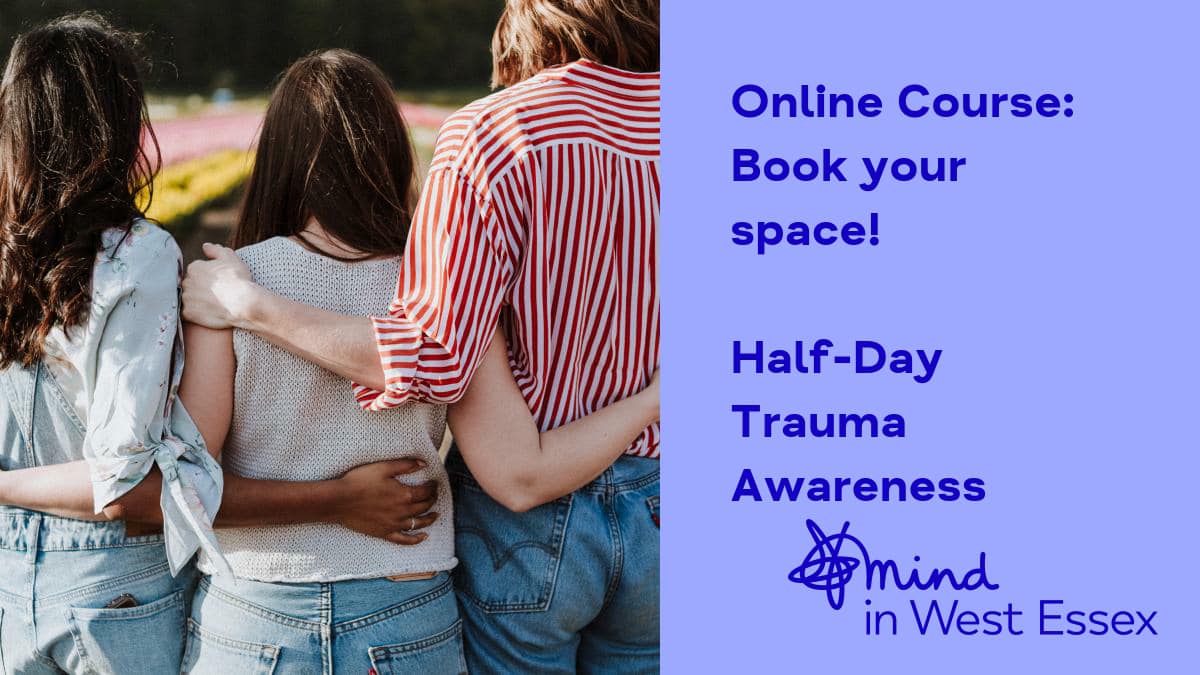 Mind in West Essex ·
@Mind_West_Essex
Now available to book!
3-hour Trauma Awareness workshops providing an opportunity for those who work with or support people who may have experienced trauma.
This workshop can be delivered online or in person.
Contact training @mindinwestessex.org.uk to enquire. https://t.co/y0LjBGnhqM
View on Twitter 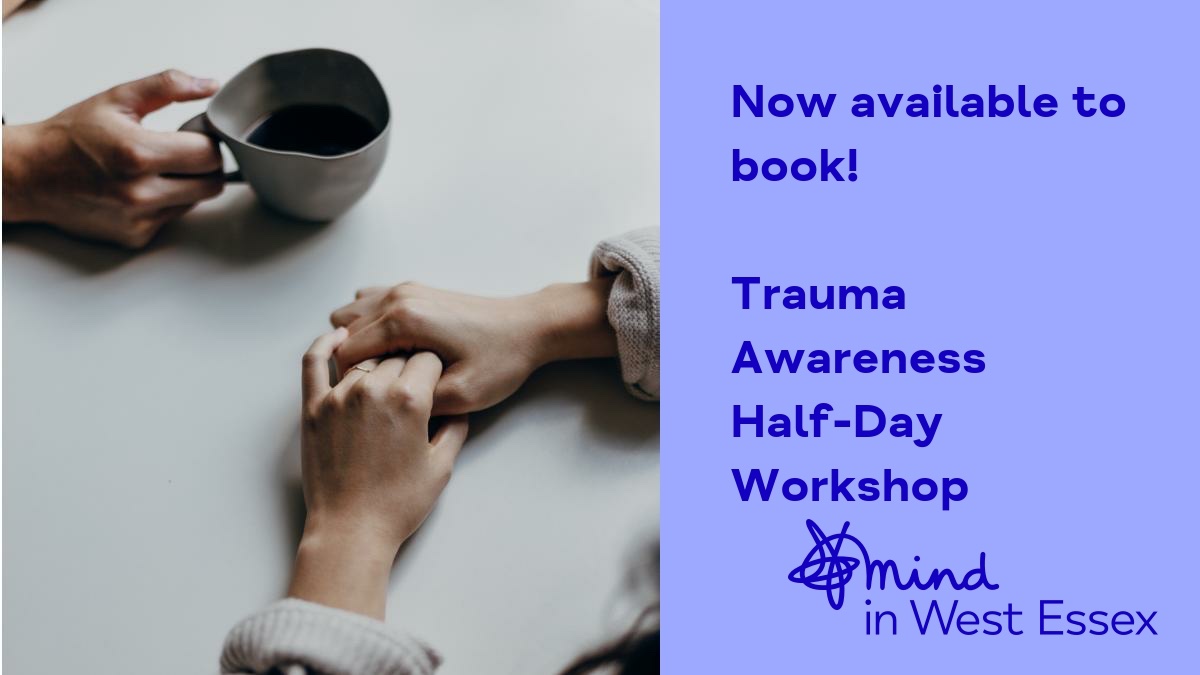 Mind in West Essex ·
@Mind_West_Essex
We are out and about today again on Harlow’s Third Avenue as we welcome the Women’s Tour through the town! 🚴‍♀️

Come say hello, find out how we can help or just chew the fat with some of our lovely team. Meet Sophie, Anoushka, Dom and Craig. 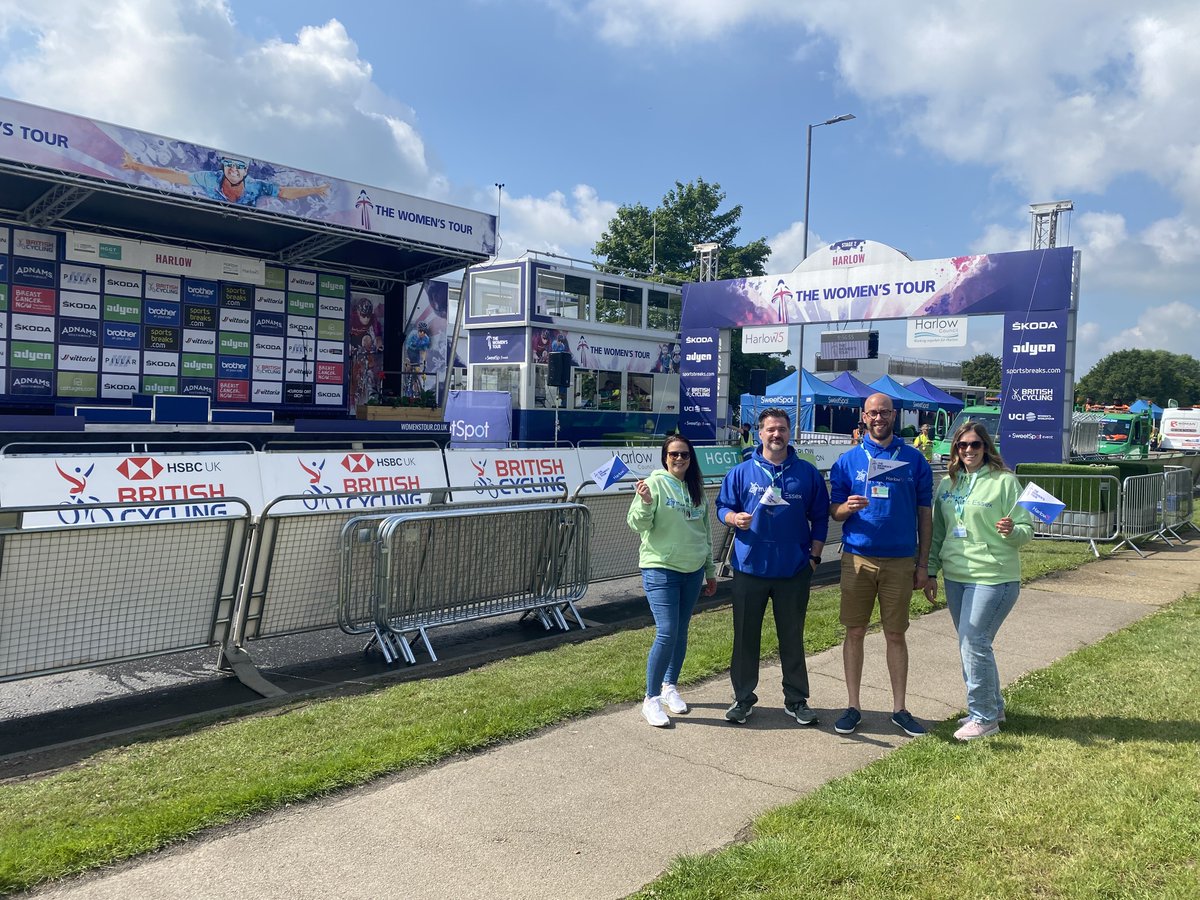 Mind in West Essex ·
@Mind_West_Essex
Great news, you can now get the @easyuk Donation Reminder on your iPhone and iPad! It'll pop up every time a donation is available so we won't miss out when you're shopping online using your mobile! Find out more here:
https://t.co/g7XNZ3yA3r
View on Twitter
1
2

We're at @essexpride today soaking up the atmosphe

We will be at Essex Pride this Saturday! Come and

Bobbies on the Beat - Join them for Connecting Wit

We had such a fantastic time at Harlow football cl

We are out and about today again on Harlow’s Thi

She is at it again! Louise absolutely smashed it f

Last night Ingrebourne Valley invited us to their

Would you like to work for Mind in West Essex? We

To all of the organisations who had us along last

It’s Mental Health Awareness Week, we all have i

Every little helps 💕 come and see us today at

A stranger; is a friend you haven't met yet #mha

With so many of us experiencing a mental health pr

I spy with my little eye....benches around West Es

It might be a bit chilly today but we're bracing t